In this tutorial we cover the following topics

Introduction
The 555 is probably the most versatile chip that exists, with endless applications. Its relatively powerful output (rated at up to 200mA) is extremely useful, and the chip itself is hard to damage. Invented in 1970 it is still in use and there is no premises that this situation will change in forseable future.

In some sense, the 555 itself is unable to do anything constructive -- it has to be accompanied by other elements, chips or circuits. Generally speaking 555 is a timing system. These devices are precision timing circuits capable of producing accurate time delays or oscillation. Contrary to appearances, its universality is the result of simplicity. In the structure of this chip, we distinguish only five blocks that can be configured in various ways.

For the 555 to function it relies on both analogue and digital electronic techniques, but if we consider its output only, it can be thought of as a digital device. The output can be in one of two states at any time, the first state is the LOW state, which is 0V. The second state is the HIGH state, which is the voltage of our power supply. The most common types of outputs can be categorized by the following

The 555 chip has only eight pins (see xx555 Precision Timers documentation or its ne555.pdf

Please notice, that in a circuit diagram the 555 timer chip is often drawn like the illustration below. The pins are not in the same order as the actual chip, this is because it is much easier to recognize the function of each pin, and makes drawing circuit diagrams much easier.

As it was mentioned earlier, inside the 555 chip, we distinguish only five blocks. Describing them we will use a simplified schematic diagram

Basic monostable example
As it was explained in the Introduction section in monostable mode, also known as one-shot mode, the timer delivers only one pulse in response to a triggering event. A transition to LOW voltage on the trigger pin TRIG creates a HIGH pulse from the output pin OUT. The duration of the pulse is determined by the value of resistor R and capacitor C, as the resistor charges the capacitor. If the reset pin RES of the timer will not be used, it should be connected the positive side of the power supply to prevent it from being activated unintentionally; low voltage on this pin resets the timer. Second capacitor 0.1nF connected to control CONT pin suppress noise.

Doing this, bear in mind that

To test this circuit we may want use LEDs. A god explanation how to do this (how to choose LED and resistor for them) without breaking them we may find in

We may use the following circuit 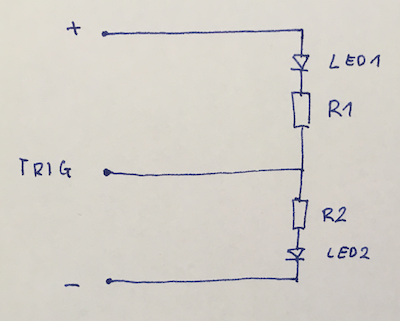 As we can see, in this mode output changes endlessly its state from HIGH to LOW and next from LOW to HIGH. How do the values for the timing capacitor and the resistors determine the frequency of the timer? If R1 and R2 are measured in kilohms, and C is measured in microfarads, the frequency f, in hertz, is given by:
$$
f = \frac{1.440}{ ( ( 2 \cdot R2 ) + R1 ) \cdot C }
$$
In the table below some values are given.

Unequal on-off cycles
When the 555 chip is wired in the standard way for astable mode, high pulses are always longer than gaps between them in the output. Eplanaiton of this is quite simple.

Adding a diode to bypass R2 allows the high and low output cycles of a timer to be adjusted independently. Now when C1 charges, the electricity flows through R1 as before but takes a shortcut around R2, through the diode (because a diode deducts some voltage, this circuit works best with a supply voltage greater than 5V). When C1 discharges, the diode blocks the flow of electricity in that direction, and so the discharge goes back through R2. R1 now controls the charge time on its own, while R2 controls the discharge time. The formula for calculating the frequency is now approximately
$$
f = \frac{1.440}{( R1 + R2 ) \cdot C1 }
$$
where R1 and R2 are in kilohms and C1 is in microfarads. If we set R1 = R2, we should get almost equal on/off cycles.